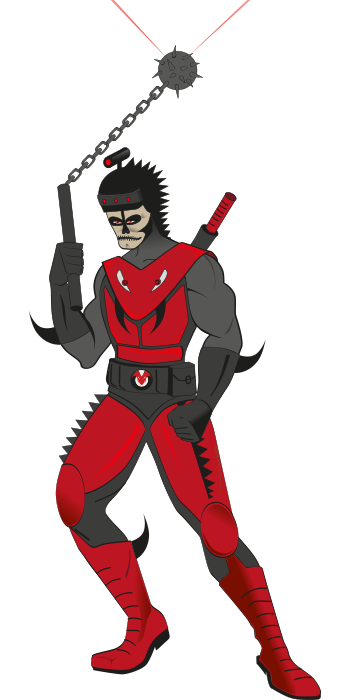 SCARIO (Real Name Unknown) is a ruthless mercenary. A former secret agent, he joined VIPERA after being double-crossed by his government and imprisoned for several years in a SUPERMAX Prison Facility. Dr. DIVIDER facilitated his escape and SCARIO is now Divider’s most loyal and ruthless subject.

Loves ancient blunt weapons like swords, and hammers and modifies them and adapts them to incorporate modern warfare technology. His favourite one is the Flail Mace, a ball chain weapon that fires laser beams.

His family things he is dead. But soon they will find out the truth.

With a height of 2m, Scario is a truly imposing and scary figure.

His metallic voice is modified by a microchip on his mask to keep his voice unrecognisable.