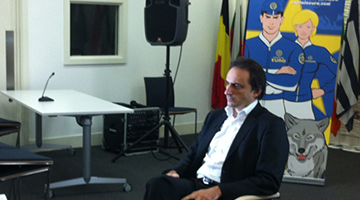 Nicolas De Santis, Captain Euro creator at the EU offices in London during the filming of the Captain Euro special programme Kobra, for Swedish National Television (SVT) in 2014.
Original 1990s compilation of global TV media coverage including CNN, FUJI TV (Japan), TVE (Spain), BBC, Bloomberg TV, Reuters TV and more. In the video, Nicolas De Santis explains to the global media the need to make Europe simpler to understand.
Check our video of the press and media launch, featuring our first website (one of the firsts on the web) and also Captain Euro and Europa appearing at the event in the flesh!

CAPTAIN EURO® | THE NEED TO FOSTER A EUROPEAN IDENTITY

The character of Captain Euro® was created and conceptualised by Nicolas De Santis in the 1990s to help develop and foster a European Union citizen identity (The Maastricht Treaty of 1992 had created the concept of European Citizenship).

De Santis came up with the idea of Captain Euro while advising European Community (now EU) institutions on brand identity issues. His social and brand research on European identity showed him that most Europeans wanted an increased sense of European identity but the EU did not have a structured brand programme or the right narrative to help people identify with Europe. There were no attractive popular European identity culture icons. De Santis also realised that following the collapse of the Berlin Wall and the Soviet Union, the European Community (EC), then made of 12 countries, was going to expand eastwards to include countries like Poland and Hungary (now the EU 28). The single market was going to be launched in 1993.

De Santis also expected that the future European currency (then called the ECU and renamed the EURO) was going to become a reality. These geopolitical, social and economic developments posed serious questions about the future of a European identity and the need for further citizen involvement in the project of European construction.

It was time for change. Communications about Europe were complex, boring and distant from its citizens. Europe needed a new way to communicate the meaning of European Unity and its future to its citizens. Mission Impossible? Enter Captain Euro!

To test European emotions and feelings towards a united Europe, De Santis created what he believed would immediately resonate with the public. A cartoon character mascot about Europe. A new European Superhero. Captain Euro® was created in 1991. It first appeared in print format and then was officially launched as a website in the early internet in 1998. Captaineuro.com became one of the first internet websites and immediately won a Microsoft Award for being one of the first sites to use flash animation for his action adventures.

What Nicolas De Santis did not know at the time was that he had created a character that would become the first comic superhero representing European Unity and one of the most universally recognized and talked about cultural icons of the European Union. Captain Euro® immediately received global media interest when it officially launched in 1998 and international coverage on the character and its purpose of uniting Europe has never stopped since. The launch of Captain Euro® also tested European perceptions, values and emotions about Europe. Feeling threatened, Eurosceptics immediately attacked Captain Euro® as EU propaganda and several campaigns and Eurosceptic articles were written against the character. The truth is that Captain Euro® has never accepted or received funding from the EU since it launched to maintain its editorial neutrality and its independence.

Cover for the Origins of Captain Euro (1998) – the first Captain Euro animated story. Although it was quite basic animation, it was one of the first uses of Adobe Flash for animation on the internet.

CAPTAIN EURO AND THE LAUNCH OF A NEW CURRENCY

Captain Euro was also used to promote the launch of the new EURO currency (1999-2002) when notes and coins began to circulate in Europe. The website featured prominently the new Euro coins and notes and included one of the first EURO currency converters on the web.

CREATING A CULTURAL ICON OF EUROPE

Captain Euro® has become a pop culture icon, recognized around the world. Captain Euro’s appearance is distinctive and iconic. He usually wears a blue and white costume, a blue cap, and a stylized blue-and-yellow “E” shield on his cap and uniform. This E-shield EURO logo is used in a myriad of media to symbolize the character. Most of the Captain Euro team also wear the same uniform style when they are on special missions.

Captain Euro’s® character presence has extended beyond his comic origins. Since 1998, the character of Captain Euro has appeared in every imaginable media form including satire, caricature, television programmes, news programmes, music videos, comics, novelizations, academic papers and even live appearances for events, public debates and EU parliamentary election campaigns. Captain Euro has even been discussed during question time in the British Parliament by MPs!

The appearance of Captain Euro on mainstream television, the cover of The Wall Street Journal and in Time magazine brought the character to the forefront of public consciousness. Captain Euro has fascinated academic institutions, the media, and politicians; with cultural and social scientists, commentators, and euro sceptic critics alike exploring the character’s impact and role in the European Union and worldwide. Various real life imitators and ‘impostors’ of Captain Euro and related characters have also appeared during the years.

At an event to promote the launch of the Euro currency.

Captain Euro and Europa on the cover of a promotional Swedish Referendum Campaign leaflet.

A test of virtual environments.

A pro-European who loves Captain Euro and dedicated the City Lights Theme to him.

Captain Euro, Europa and Lupo on the cover of Marketing Magazine

Launch of the Euro

Captain Euro was extensively used by the UK mass media for stories related to the launch of the Euro currency.

Online cartoon depicting USA vs. Europe with the 2 super heroes confronting each other. Captain Euro represented as the diplomat and Captain America as the violent one.

INSEAD Business School featured Captain Euro on its homepage in 1998, to teach people about the Euro.

The original Captain Euro website was launched in 1998, and included 2 flash animated adventures, some of the first uses of flash for animation on the internet.

Our initial web animated adventures in 1998 included a pop up glossary to learn languages, history, culture and geography, while having fun (Edu-tainment).

Here is me and Europa dancing to the tune of the EURO song featured in the famous Programme Eurotrash on Channel 4 in the UK. Introduction by famous French presenter Antoine de Caunes. Europa and I go wild! Do not miss it.

WHO IS DISCUSSED IN THE UK PARLIAMENT AND THE EUROPEAN PARLIAMENT? IRON MAN? THOR? SUPERMAN?

See this PDF for examples of how he has been used in Parliament. 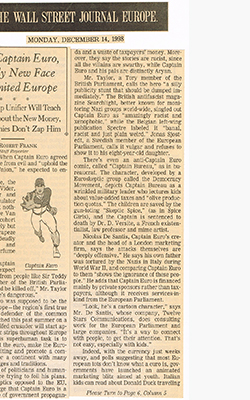 Captain Euro – the new face of a United Europe. 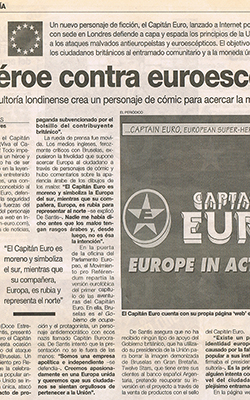 A hero against the Eurosceptics! 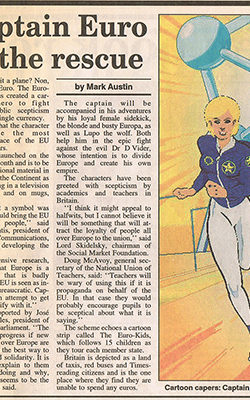 Captain Euro to the rescue! 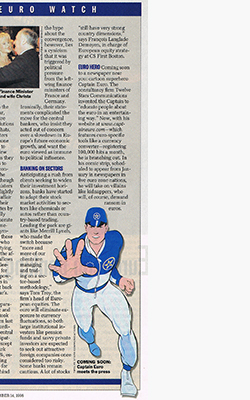 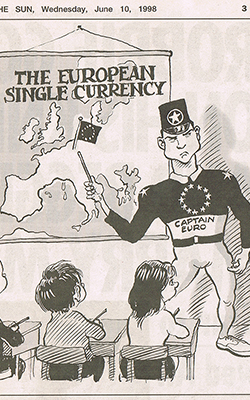 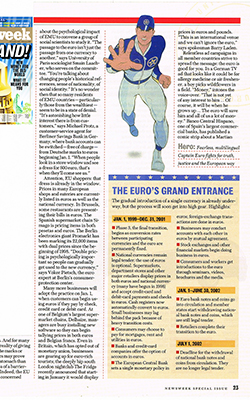 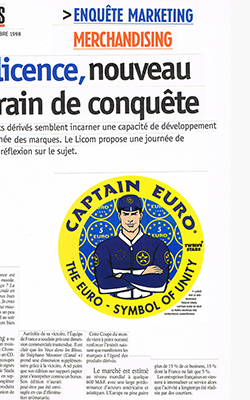 The new brand of Europe. 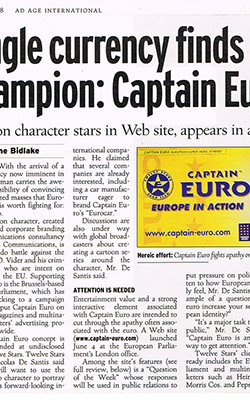 Single currency has a new champion to fight apathy… 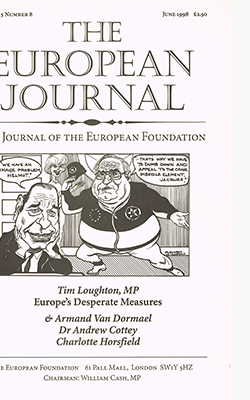 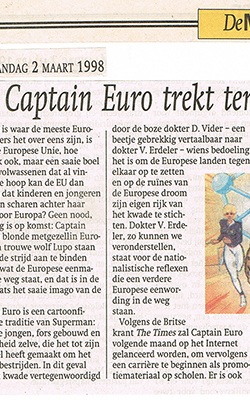 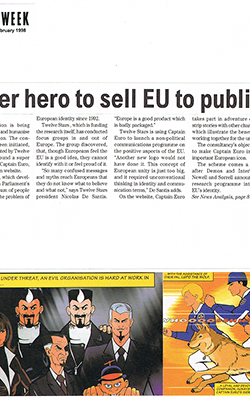 Selling the EU to the public. 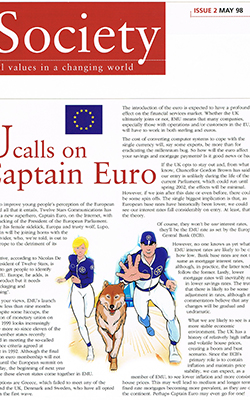 The EU calls on Captain Euro! 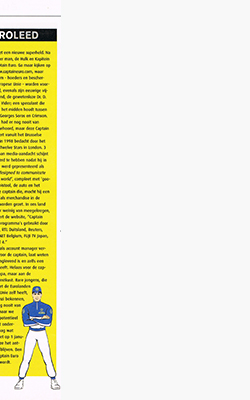 Nations in search of a story. 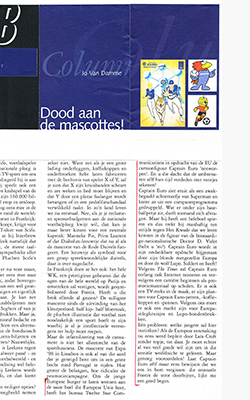 The new mascot of Europe. 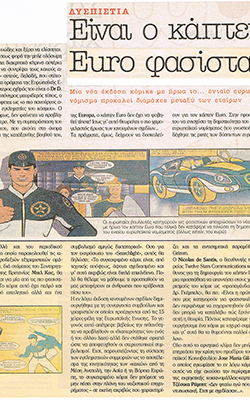 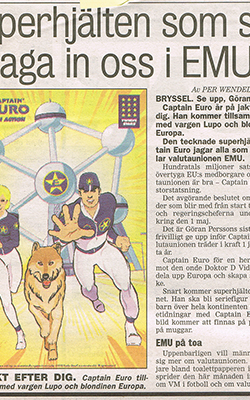 The Captain Euro team – fighting for Europe and for unity. 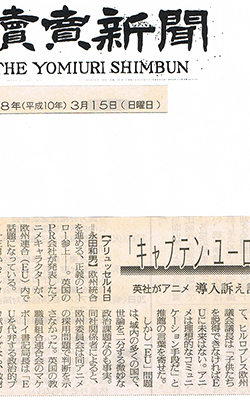 Europe has a voice – Captain Euro. 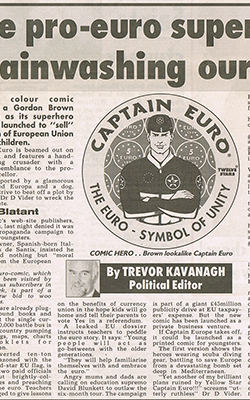 The European Superhero brainwashing our kids. 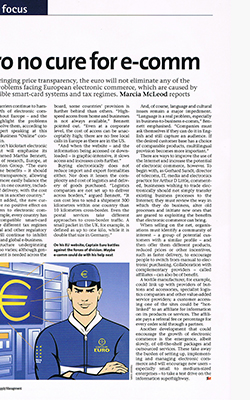 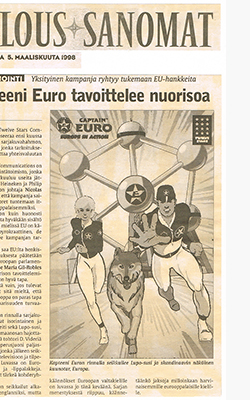 A new dawn for Europe. 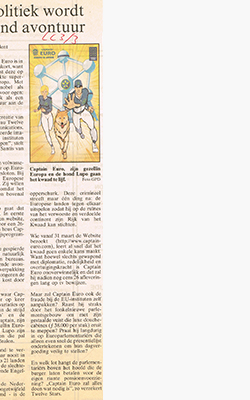 Captain Euro and Europa have arrived.

A new symbol for Europe. 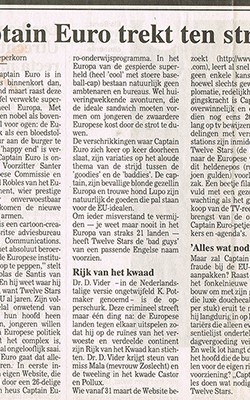 Changing the image of Europe.