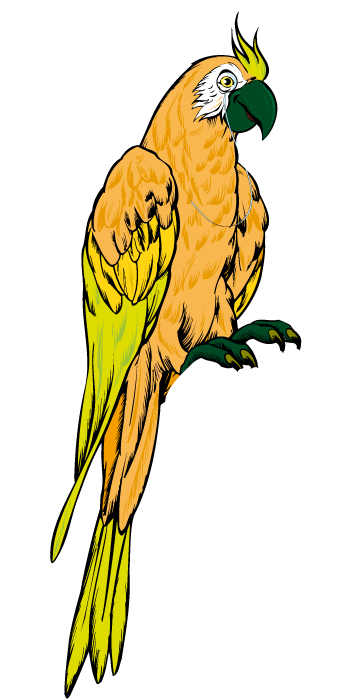 Pappagallo is Dr. Divider’s favourite pet and is his animal sidekick. A rare species of parrot (Chloroptera Rex) from the Amazon forest, Pappagallo was a present from Dr. Divider’s friend, Arthur Hunt, international poacher.

Pappagallo is excellent with human speech – and has learned hundreds of phrases and words. Dr. Divider is convinced that Pappagallo can not only repeat these phrases and words, but understands their meaning and context. Whether this is true or not remains to be seen.

Dr. Divider’s takes a particularly childish guilty pleasure in teaching Pappagallo to insult others and compliment himself. He finds particular joy in sending Pappagallo on missions to hurl a list of insults off at Captain Euro and his team, before leaving as swiftly as he came. Sometimes, however, this serves a dual purpose; Pappagallo is frequently used to spy on the Captain Euro team, under the guise of childish insults.

Being a bird, Pappagallo is capable of flight. And yet, he prefers to ride shotgun in airplanes, whenever possible.

Lupo in particular would love to get his paws on the taunting, cocky bird, someday. The reality is, Pappagallo is only as brave as any other bird, and never really pushes his luck.