Full article text from the FT

Remember Captain Euro, the comic strip “Superhéro de l‘Europe” created by a think-tank to help promote the single currency’s 1999 launch? Not many Europeans do, so last year he was resurrected to breathe new life into the currency, starring in new cartoon adventures such as “Working with Renzi to Reform Italy” and “Angela Merkel Learns to Bluff”. 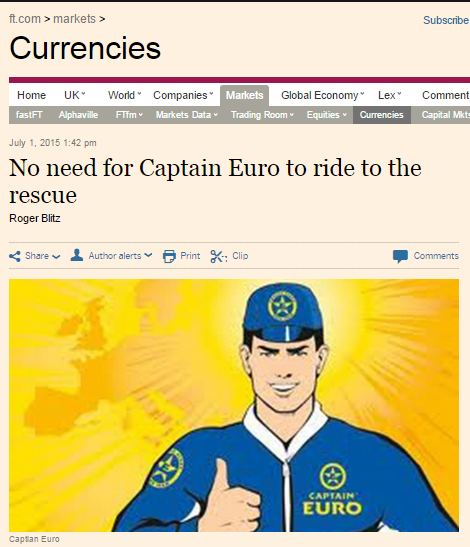 But in real life, the single currency is displaying heroic qualities even without the help of the blue-tracksuited multi-linguist and his crack team (including blonde oceanographer Europa and the faithful wonderdog Lupo).

The euro’s resilience of recent weeks has been a curious play-within-a-play as the Greek crisis worsened. Surely, the theory went, with every twist of the unfolding eurozone nightmare the market would kill the single currency.

And yet, if indeed the Greek government has capitulated and the crisis has abated, the euro will have made it through a period of flux in surprisingly good shape.

Going short on the euro was a feature of the forex market in the first quarter of 2015 — but not the second quarter.

Evidence from the Commodity Futures Trading Commission shows traders unwinding their short positions on the euro, bringing their money back home. The result? The euro gets stronger. It turned in its second best quarter against the dollar for more than four years. Reasons for the euro’s resilience are numerous, but the one that persists is tied to the performance of the euro as a funding currency in a carry trade.

This is when investors borrow in a currency with a low yield to buy a currency with a high one — the aim being to pocket the difference in interest rates. “Carry has been the dominant trade in forex for 20 years,” says Simon Derrick, chief market strategist at BNY Mellon.

It was a particular forex market fad in the middle of the last decade, but it came to a grinding halt with the global financial crisis and has looked pretty moribund as central banks around the world chased each other’s rates to the bottom.

But is the carry trade coming back into fashion? The carry trade is risky. It tends to need a climate of low volatility, interest rate divergence and a calm period of economic recovery, and the backdrop of the Greek crisis has hardly been ideal market conditions.

But Mr Derrick says even in periods of high volatility and narrow interest rate differentials the evidence of the euro’s performance of recent weeks suggest the carry trade is alive and kicking.

With the European Central Bank’s benchmark main refinancing rate staying at 0.05 per cent since September, the euro has looked ripe for being the funding currency of choice.
“Does the euro have the attributes of a funding currency? I think it does,” says Adam Cole of Royal Bank of Canada.

“But the broader question is — does the market have a need for funding currencies? Or to put it another way, is the carry trade a viable investment strategy? And that’s less clear-cut.”

Even if many investors have been using the euro as a funding currency, its use will not last, says Kit Juckes, currency strategist at Société Générale. “The perfect funding currency is expensive on fair value models and has low rates,” he says, citing the Japanese yen as the ideal carry currency over most of the past two decades.

“The euro’s problem is that on most fair value models it is now cheap so that on a very long-term basis it’s likely to appreciate. The low rates are also not as low relative to high yielders as they were.”

So Captain Euro lives to fight on, seeking new adventures and perhaps emboldened by his Greek caper, though relations with one member of his team may well have soured. His systems operator is a Greek scientist, called Pythagoras 1.

Can they reconcile their differences? Stay tuned.

Read the article on the Financial Times website here!