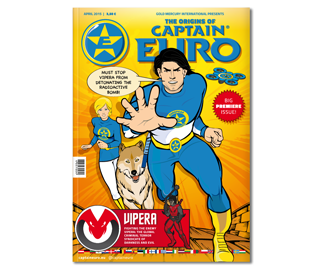 Captain Euro, is the superhero persona of Adam Andros, a young internet cyber software and Virtual reality (VR) genius and millionaire. His father, an environmentalist adventurer, works around the world protecting natural habitats and discovering ancient relics. During a trip to the artic, his father discovers an ancient Viking ship and Adam joins him. Together they go on to uncover an incredible mystery inside the ship.

During that incredible adventure, Adam is transformed, meets beautiful Donna Eden (Europa) and comes face to face for the first time with his arch-nemesis, Dr. Divider, the head of VIPERA crime syndicate. His father is then killed by Dr. Divider, who wants to steal their newly found treasures. From that day…things will never be the same for Adam Andros or Donna Eden who have become Captain Euro & Europa and go on to create THE EUROPEAN SUPERFORCE unit. They assemble a crack team of experts, including Erik (Sweden), Marcus (Britain), Elena (Italy), Pythagoras 1 (AI assistant) and Lupo (a European Grey wolf). Together, they have the super team spirit, brainpower, high-tech gadgetry and strength to fight VIPERA, defend justice and tackle the world’s greatest challenges!

You can find out more about Captain Euro’s team here.

Captain Euro and his team operate from diverse secret bases located in iconic locations around Europe like the Eiffel Tower (Paris), the Atomium Building (Brussels), the Colosseum (Rome) or the Big Ben in London.  During their adventures, Captain Euro and his team encounter a wide variety of exciting and interesting characters, both fictional and real. Not only do we get to see them going toe to toe with the evil Dr. Divider and his henchmen, but we also get to enjoy watching Captain Euro negotiating with world leaders, monitoring the world, and developing groundbreaking ideas to advance sustainability.

Check out some of our stories here! 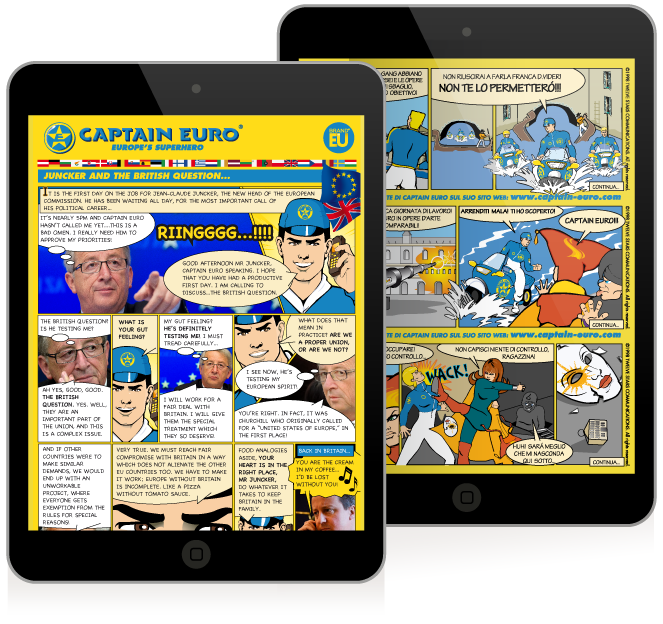 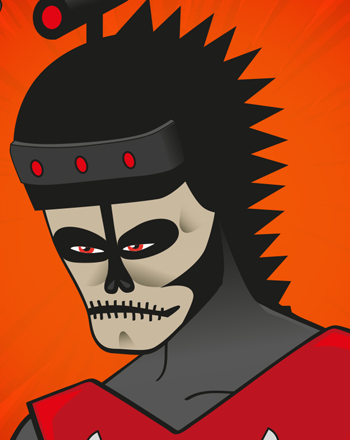 Captain Euro and his team face a variety of adversaries. His main adversary is evil and ruthless speculator DR. DIVIDER, and his evil VIPERA crime syndicate whose only goal is expansion, at any human, economic, social or environmental cost.

All DR. DIVIDER cares about is making more money, with no concern for the suffering of others. His ultimate goal is to make governments weak and VIPERA strong. He believes that doing this will create a climate of absolute global economic disaster and ruin which he can use to secure cheap investments and developments, which in the long term can net him incredible profits. He can also use chaos to exert more influence and power over the weaker states.

One of the companies owned by VIPERA is a travelling CIRCUS, which he uses as a front and secret base to recruit his evil followers. Dr. DIVIDER’s team includes SCARIO, a ruthless mercenary, his son JUNIOR, the sole heir to his evil empire, NINOT, a human cannonball working in a circus, with a flair for sleight of hand and computer hacking, and MALA GLAMORA, a former child star of the trapeze, lion tamer and knife thrower; among others.

Captain Euro® was originally launched back in the 1990s to help launch the new Euro currency, and solve Europe’s lack of clear identity. It created instant public impact, appearing on the cover of The Wall Street Journal, Time magazine, The Times, BBC, The Sun, CNN and news channels around the world. He was an exciting figure. With the Euro’s successful launch and reception, Captain Euro had done his job!

AT LEAST, UNTIL NOW! Now, Captain Euro has returned to fight evil syndicate VIPERA. He’s back, and this time, it’s personal!

He is also tasked with exposing and criticizing areas which lack effective global governance, or systems with excess bureaucracy; particularly in the context of contemporary national, European and global politics. These new stories include Captain Euro dealing with global issues and world leaders including Barack Obama, Angela Merkel, Matteo Renzi, European Commission President Juncker, Vladimir Putin and David Cameron, among others. When world leaders want advise and wisdom about EU and global affairs, they come to Captain Euro. Who else!? 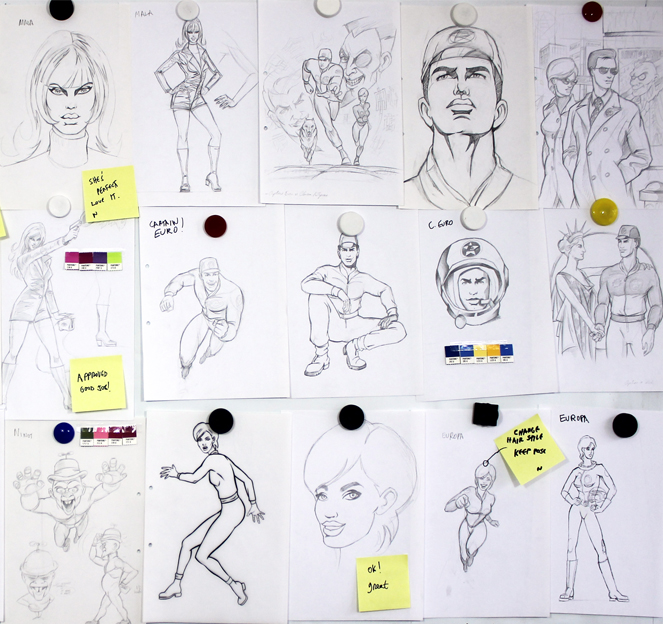 Check out our “Making Of” section to take a behind the scenes look a how we draw, concept, and design Captain Euro comics and characters!

Check out some of our stories which involve world leaders and current political affairs!